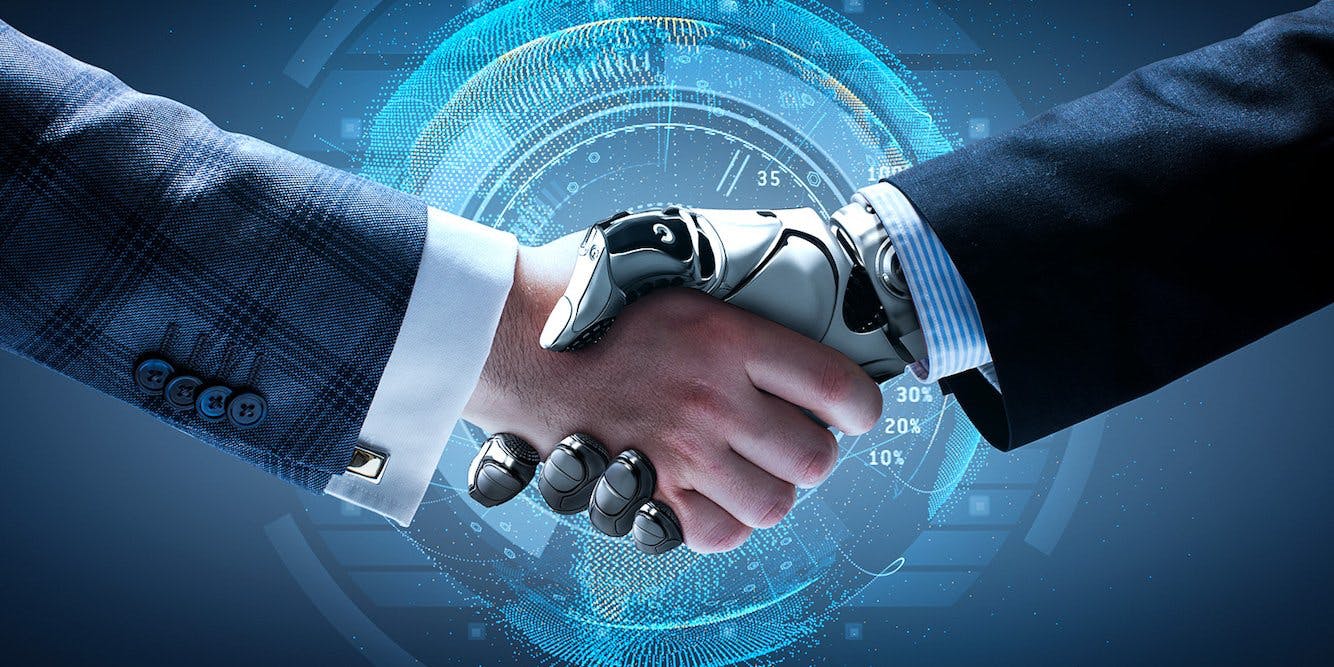 The dawn of collaborative intelligence is already here.

AI is often given a bad rep for enabling robots to replace humans in their jobs, but that’s not really the full picture. What’s occurring is a modern industrial revolution in which machine learning and automation is disrupting every industry, the way computers did from the 1970s up until 2000s.

The paradigm shift between humans and computers is increasing; and how we utilize computers to assist in our job functions is going to change along with it. Machines aren’t taking human jobs – they’re solidifying our businesses and making our jobs (and lives) easier along the way.

When working together, AI and humans can achieve great things. A recent Harvard study proves that human analysis combined with deep learning has achieved better results when compared to pathologist only or AI only. By working together, they achieved a 99.5 percent success rate in identifying cancer.

During Google’s I/O ’18 Keynote, we saw something even more interesting. Not only did AI augment doctor’s diagnosis of diabetic retinopathy, but AI also predicted other elements not easily possible such as age, sex, weight, and risk of cardiovascular disease.

These are just a few examples of why we believe Data Has A Better Idea®!

The evolved relationship between man and tools

The power of artificial intelligence is anything but artificial. The ability to process and analyze millions of calculations per second gives AI the ability to quickly present information to human workers in a digestible fashion.

Automation and machine learning gives human workers superpowers they have never possessed. By working in collaboration, human powers and skills are amplified by augmented intelligence. This new collaborative intelligence will be capable of performing unimaginable superhuman feats.

While the autonomous car doesn’t require a driver, it does require an Explainer to translate between tech and business units, a Trainer to guide AI in its learning, and a Sustainer to ensure everything works as designed.

The same is true of Vending Analytics and our other in-development applications, where inventory management, product selection, and placement are optimized using the power of collaborative intelligence. Vending machine operators or category planners aren’t being displaced by AI. Instead, their job is being made easier and more insightful than ever before while revenue streams are being optimized for growth.

In most cases, HIVERY acts as both an Explainer and a Trainer, while our customers are Sustainers who ensure our AI applications are making recommendations that align with their business goals.  These are all linked together with one thing: data and why we often say Data Has A Better Idea®

Since 2013, jobs requiring AI skills have grown over 450 percent. Active AI startups have grown by 1400 percent since 2000. This modern tool is not only creating jobs, but it’s carrying a large portion of the economy on its back in the process.

The fear and doubt surrounding AI typically revolve around its interaction with humans. Nevertheless, perspectives on AI are shifting now that AI is permeating into the society. Digital assistants like Amazon’s Alexa and Apple’s Siri, for instance, are now used by half the population, and 68 percent of users believe AI is less biased than humans.

Arguably, for AI augmentation to work well with humans, it requires an element of humanization through personality development. We might consider the prospect of “personality donors”, similar to “blood donors”, who will “donate” parts of their personality for specific tasks requiring intense human interactions.

Application examples can vary from a medical practitioner whose concerned patient requires empathy and confidence in their interaction to a customer support specialist dealing with an irritated customer who requires a calm, understanding and polite interaction over the phone. Below is a great example of an AI application that synthesizes elements of humanization and personality. In fact, Google has an entire team dedicated to it. Yet, acting too little (or too much) like a human can make AI creepy leading to Uncanny valley. So, this is a balancing act; and art in itself as much as it is science.

It’s natural to fear change and the unknown. Hollywood certainly hasn’t made trusting robots any easier. But the next phase of the industrial revolution is upon us, and our creativity, morality, and emotion are the strengths we’ll always hold over machines.

The best way to think about all this is this: Data Has A Better Idea® and at HIVERY we listen to data, harness it and unlock its genius and offer this genius idea to our customers.

Sources
3 new jobs A.I. is creating: Trainers, explainers, and sustainers
‘Machines of Loving Grace,’ by John Markoff
Human + Machine: Reimagining Work in the Age of AI
Why Automation Today Is Like Computers in the 1980s
10 Charts That Will Change Your Perspective On Artificial Intelligence’s Growth
Consumers: 46% use Voice Assistants in US, 68% Think AI Less Biased
The 6 Critical Chatbot Statistics for 2018
Google Wants to Give Your Computer a Personality

Share
Latest Content
blog
AI, Assortment Planning, and Supply Chain: What to Know
blog
Shelf relevance: a revolutionary approach to assortment planning and execution
blog
At your next product line review (PLR), have the AI do all the talking.